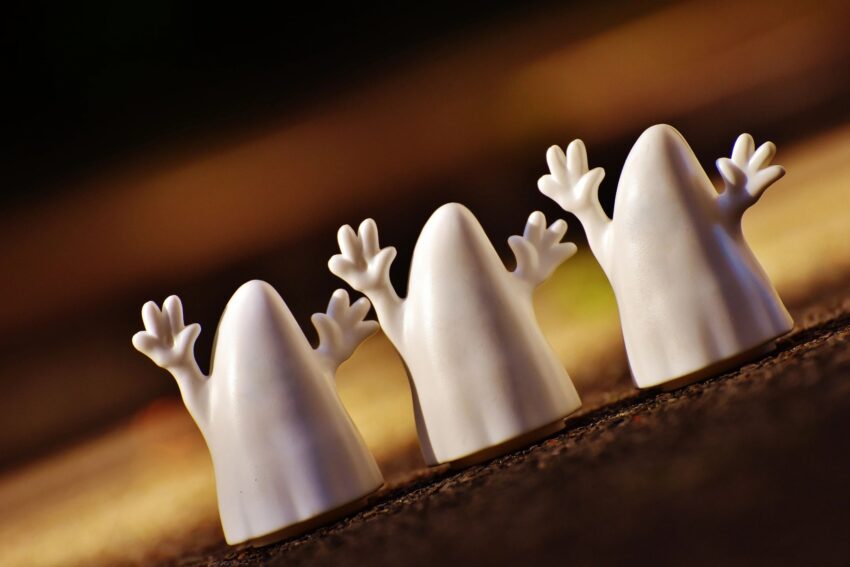 With Halloween coming up just around the corner, I thought I’d give some love to a few cozy ghosts.

*All links go to the Goodreads page for the series.

The Haunted Home Renovation series by Juliet Blackwell is set in the San Francisco Bay Area. The series features Melanie “Mel” Turner who remodels historic homes and buildings. Juliet brings the history of the Bay Area to life in her stories. The tone of her writing brings a wonderful mood to these ghost-filled mysteries.

Molly MacRae’s Haunted Yarn Shop series features Kath Ruthledge, who runs a fiber and fabric shop located in Tennessee. The shop is haunted by Geneva, an understandably melodramatic ghost who grew to be one of my favorite ghosts ever by the end of the series. For an ethereal being, she is packed with personality. Kath and her friends in the TGIF (Thank God It’s Fiber) group are fun to armchair sleuth with, too. If you love fiber arts, you will get plenty of discussion of it here.

The Haunted Library series by Allison Brook (pseudonym of Marilyn Levinson) is based in Connecticut. Carrie Singleton is the head of programs at the local library. The library is haunted by Evelyn. Carrie, Evelyn, and Smokey Joe the library cat work together to solve some local mysteries, including Evelyn’s. For a series based in a library, I don’t recall books playing a big role in the mysteries. They did, however, include lots of locals and interesting scenarios that kept me engaged and looking forward to the next in the series.

Alice Kimberly (pseudonym for Cleo Coyle) writes the Haunted Bookshop series based in Rhode Island. Penelope is the bookshop manager who gets help from Jack, the ghost of a PI who was killed 50 years prior. Jack brings the flavor of his generation with him to these stories. So far I have only read the first two in the series, but I found the play between Penelope the amateur sleuth, and Jack the former legit PI an interesting one.